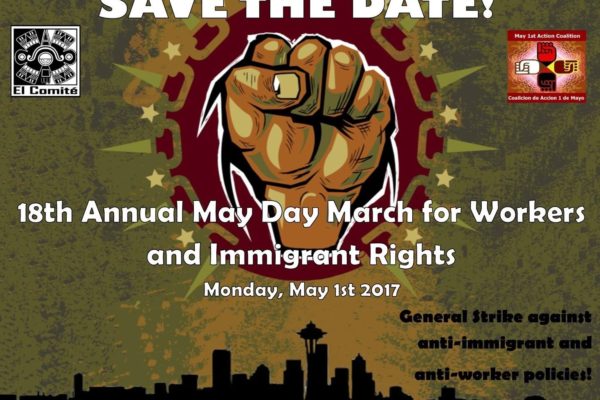 Public · Hosted by May 1st Action Coalition and El Comité

SEATTLE – El Comité and the May 1st Action Coalition are calling for a General Strike on May 1st, 2017 (International Workers’ Day) as we take to the streets of Seattle for the 18th Annual May Day March for Workers and Immigrant Rights. We are responding to a nationwide call for a strike on May Day, as well as to many in our community who have asked for a strong response to attacks by the new administration on labor in general, and immigrant workers in particular. The March and General Strike on May 1st are among several coordinated events happening in communities across the State of Washington, which include Yakima, Olympia, and Bellingham. Event details are as follows:

Our purpose for going on strike is to combat the climate of fear spreading into every corner of our communities. While the Administration rails against “foreign” terrorists, it has unleashed its own terrorist organization, Immigration and Customs Enforcement (ICE). ICE agents kidnap community members, at work or home, without warning or warrants. They separate children from parents and wives from husbands. They deport or incarcerate without any pretense of due process. Likewise, the administration has made it abundantly clear that they are coming after all our communities in their attempt to debilitate organized labor, curtail environmental protections, continue a horrific war against women and reproductive rights, allow for the further killing and mass incarceration of people of color, and further relegate our immigrant sisters and brothers to the social and economic margins. Seattle will be among other major cities on the West Coast, including Portland, San Francisco, and Los Angeles that are organizing marches in protest of the Trump Administration’s first 100 days in power. We have been fighting separately for too long and this negligence and separation must cease. It can for at least one day: May Day!

Given the current political climate, we anticipate one of the largest crowds in the nearly two decades of the march. It takes a lot of time, effort, and financial effort to make the march successful. Please consider donating to the Annual March. With your donation, we will be able to:

You can donate to the cause.